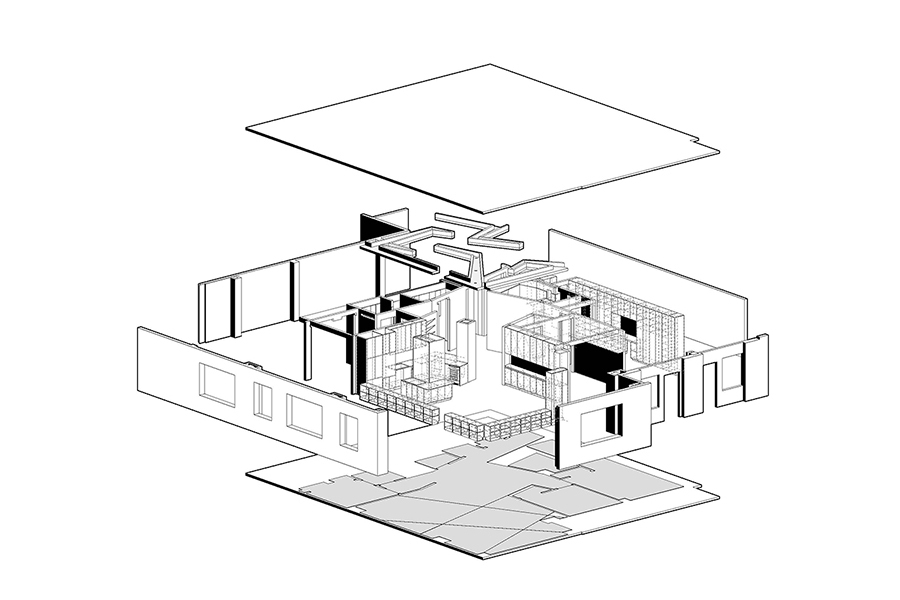 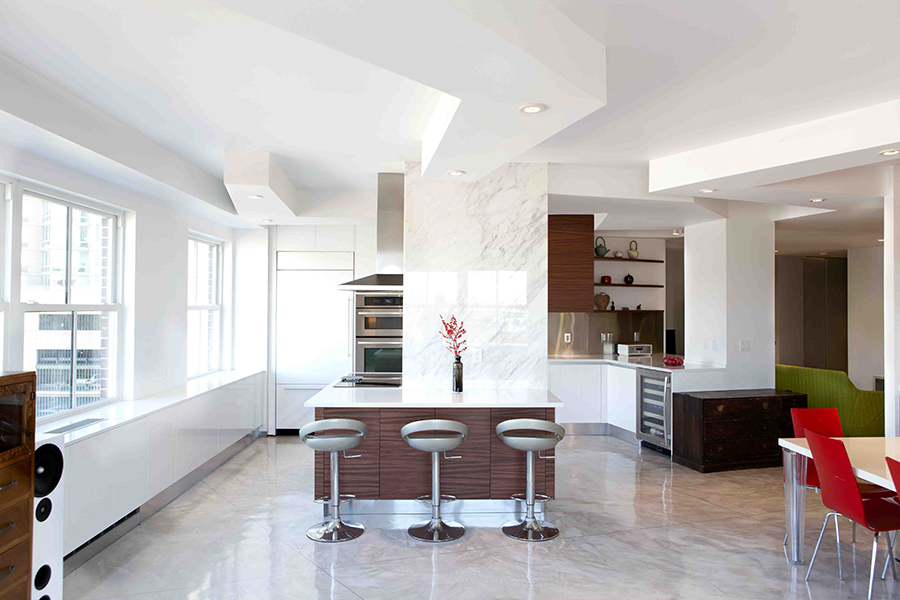 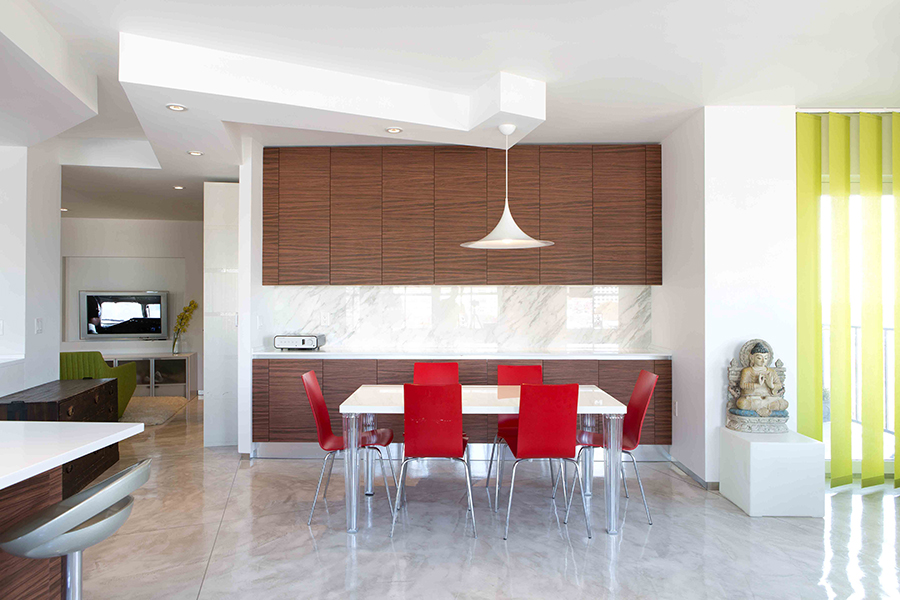 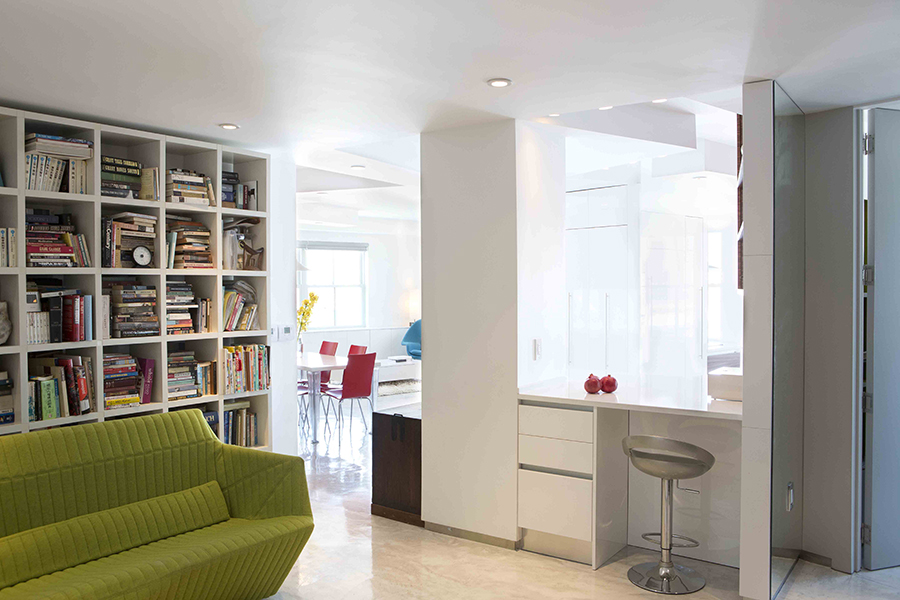 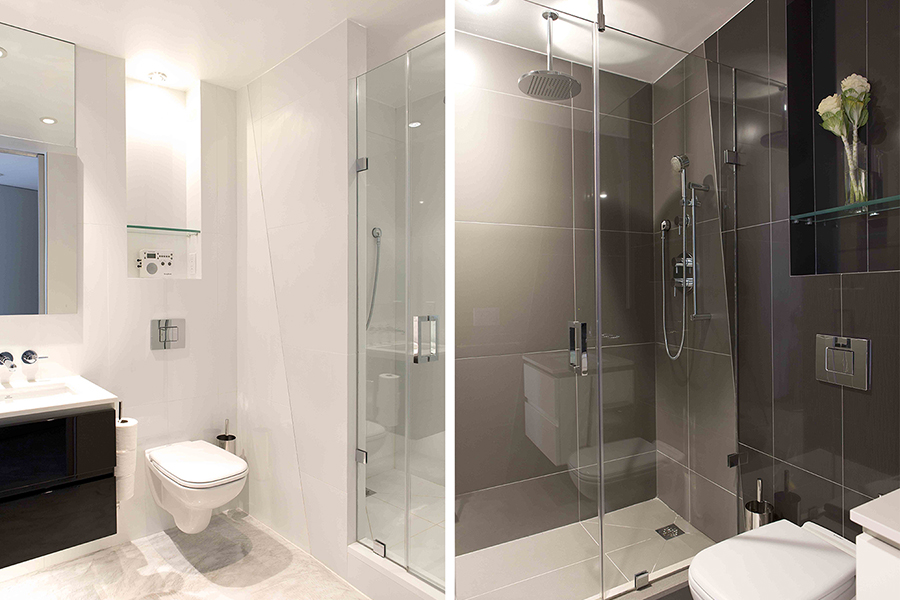 This existing three-bedroom apartment was large in size but organized into several disconnected smaller living spaces and hallways, made to feel smaller by low ceilings. Our design sought to open up the existing spaces by removing as many interior partitions as possible, opening up the kitchen, dining and living spaces to an expansive view of Liberty Harbor and abundant natural light. The use of a diagonal to reorganize the interior minimized the amount of space lost to hallways and made possible the creation of a small media room at the center of the apartment, forming a linkage between bedrooms while clearly separated from the main living and dining areas. Dropped ceilings with recessed lights in this area emphasized the spatial definition and contrasted with the higher ceilings of the main living spaces. Diagonally arranged soffits drop down from the higher ceiling of the main living area to organize lighting along paths of movement within the space, guiding the eye to views
to the harbor and establishing different program zones such as the bar height counter top backed by a Carramarble slab or the dining area which is punctuated by a pendant fixture mounted to the end of one of these soffitarms, asymmetrically placed over the table in front of a built-in walnut veneer cabinetry and credenza. The pattern of these ceiling soffits is reflected in the metallic lines that articulate the high gloss epoxy floor finish.Designed to be clean and airy, with high-gloss lacquer cabinetry reflecting the light, metal reveals at the base make walls appear to float, and built-in vanities and accessories designed to float for easy cleaning. Storage is maximized throughout the apartment with Italian crafted lacquer cabinets. In the bathrooms where natural light is unavailable, virtual light is created through a subtle play of diagonally patterned tiles in tones of grey.